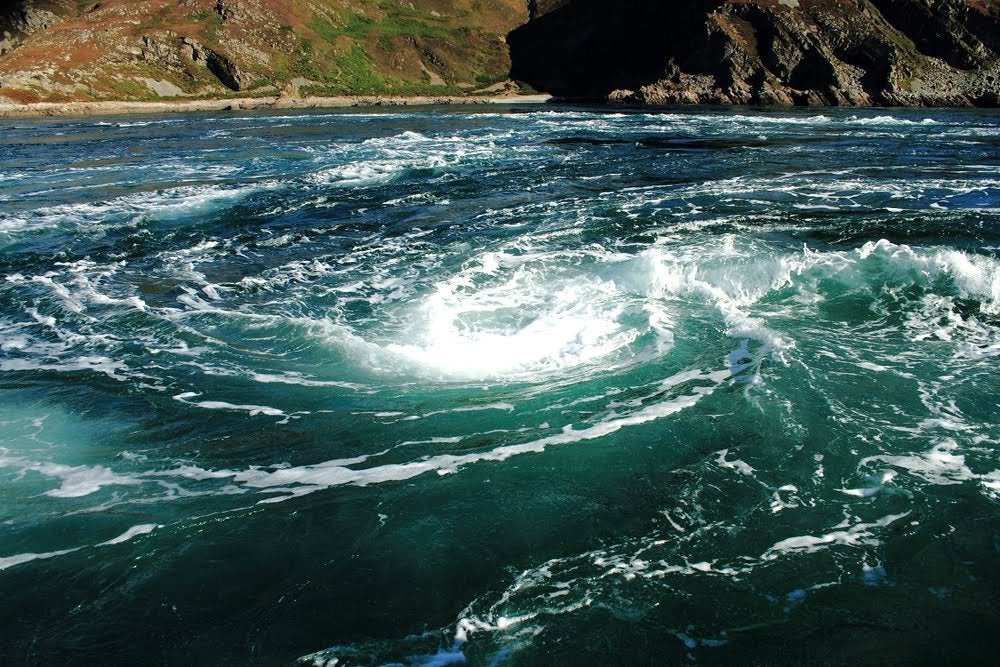 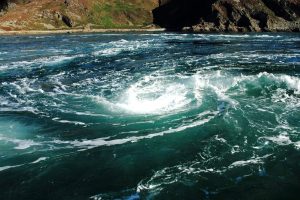 Diving in the 3rd biggest whirlpool in the world – The Corryvreckan

Billed as the third-largest whirlpool in the world the Correyvreckan is situated in the Gulf of Correyvreckan between the islands of Scarba and Jura just off the west coast of Scotland, a notorious stretch of ocean and marked at that time as being un-navigable on British Royal Navy charts and an area of danger to all shipping, the Pilot Book for the area also recommended all shipping to stay well clear of the whirlpool and reported that certain conditions could produce colossal standing waves. The Correyvreckan Whirlpool was indeed formidable, and it was said that the roar of the maelstrom could be heard 10 miles away!

The intended dive site was an underwater pinnacle just off the coast of Scarba around which the whirlpool revolved. The pinnacle was at the end of a ridge running out from the shore of Scarba, the ridge dropping down to 60 metres before rising up in the underwater pinnacle which itself rose to within 30 metres of the surface before falling away again to 130 metres on the other side and the seabed dropping half a mile further eastward into a depression 220 metres deep. It was the 8-knot tides moving over and around this topography and the pinnacle itself that created the fearsome maelstrom! This pinnacle and the whirlpool was known locally as the “Cailleach” or Old Hag which was the name of the Celtic storm goddess and local mythology had it that in ancient times a Viking king called Breachon, who for the hand of a beautiful princess, the daughter of ‘The Lord Of The Isles’ was ordered to anchor his galley for three consecutive nights in the eye of the Cailleach. He had gone back to Scandinavia for advice and returned with three anchors with warps made from wool, hemp and the last made from pure virgins’ hair. 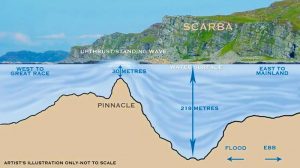 On the first night, the wool rope parted, followed on the second night by the hemp rope. On the third and final night, the rope made of virgins’ hair eventually parted and the galley and her crew were swept to their deaths. One man and Breachon’s dog survived, and the dog is said to have pulled Breachon’s body ashore in Jura in a beautiful and calm bay called Bagh Glean Nam Moc and his body buried in Kings Cave. It was found later that one of the Norwegian girls who supplied the hair was not as pure as she claimed!

Needless to say, this is a dive to be taken seriously and required meticulous planning. We consult the tide tables for the weakest tidal streams of the year, or as we put it the ‘neapest’ of the neaps! Spring tides are when both the sun and the moon are pulling in alignment to produce the highest high tides and the lowest low tides and consequently the fastest and strongest currents. Neap tides are when the Sun and Moon are pulling on the seas at right angles to one another, cancelling out some of their power and producing the lowest high tides and highest low tides. We were looking for a neap tide where not only the sun and moon were attempting to cancel one another out but also where distant planets and stars were also in opposition and producing the least movement of tidal waters and weakest currents. On the pinnacle, even at the calmest neap, slack water when the tide turns only lasts for around forty minutes.

So there we were in an inflatable called Dark Star with five divers aboard and entering the genuinely dark and foreboding aspect of the Gulf of Correyvreckan from the east. As we motor along even at this far end of the channel, the sea is full of small whirlpools and smooth mounds as up currents hit the surface, and we can feel the boat bending as she passes over them. We are intrigued and inflating our drysuits we drop in the water, holding onto the side of the boat at first to see what effect these whirlpools have on us. We too bend like the boat, but it’s not that strong, and so we release our holds on the boat and drift along quite pleasantly enjoying this natural Jacuzzi.

We approach the site of the whirlpool early, and the tide is still running strong, so we don’t attempt to shot it straight away. In the distance at the seaward end of the Gulf, we see a line across the horizon like a Tsunami, with time to spare and growing curiosity we motor over to the phenomena. It’s a standing vertical wave, a stationary wall of water at least a mile long and extending across the mouth of the Gulf. We park the inflatable right against the wave; close enough to put our hands in, which we do. The wall of water is smooth and clear and reaches high above our heads, and I guess at the height of three men maybe 6 metres high! 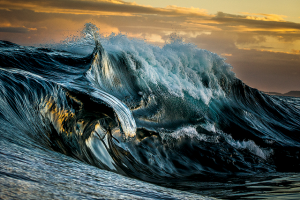 We motor back to the site of the pinnacle but find our echo sounder will not operate through the sheer amount of air bubbles in the water produced by the turbulence. The current is still running very strong, and there is no clearly defined whirlpool, but we have the exact coordinates, and I’m pleasantly surprised that our shot line lands on the pinnacle after just a few attempts. We have a hefty shot on the end of 60 metres of line, and it’s hard work to pull it up after each failed attempt so early success in finding the pinnacle is very welcome. We have attached three large yacht fenders as a huge buoy at the surface end of the line to mark the spot, but these are carried underwater by the fierce current as soon as we release them and disappear from sight.

Undeterred we run Dark Star up unto a stony beach on the island of Scarba. It’s a hot sunny day so we take off or partly remove our dry suits and lounge in the sun to await the resurfacing of the fenders.

Sure enough, slack water arrives and up pop our fenders, it’s a mad rush now to kit up and motor out but in no time at all the first party of divers are over the side. I’m in the second wave and have just twenty minutes before the beast awakens, the first divers are up and as soon as we’ve helped them back on board we roll backwards into the sea and are dropping down through the water using the shot-line as a guide. We find the pinnacle at 30 metres and there’s a small genie-like whirlpool dancing off the top left-hand edge. I’m expecting a marble smooth pillar of rock and I’m surprised to find a fairly rough rock with holes and crustaceans. A little crab pops out of a hole and I amuse myself by thinking what his postal address might be. There are smooth white pebbles in the entrance to the hole and I take one as a souvenir. We explore the pinnacle, swimming around it and down to around 40 metres but soon we can feel the water getting stronger and we swim back up the rock, as the strength of the current increases we climb the rock hand over hand. When we reach the shot-line the tide is really running, we have securely tied the fenders to the boat so we don’t expect to find them coming down to greet us but even so, we waste no time on ascending and in the greater interests of safety we ignore safety stops. We are like flags on a line as we ascend the line, and then we’re out of the water and back into Dark Star. Total exhilaration!